Filter Bubbles and Fake News: the relation between politics, social media and journalism

The internet, social media and new communications platforms were going to bring us closer together, link people and ensure more knowledge and understanding of the other, or so it was said. However, in recent years it has become increasingly clear that there is a strong development in the opposite direction.

Smart algorithms enable online content providers to know exactly what our preferences and interests are. It may seem nice to solely have information provided that is tailored to our own preferences, but the consequence of this is that we only see our own truths. The internet creates filter bubbles in which everyone only engages with their own reality and in which other opinions simply no longer exist. Instead of pluriformity the internet has, conversely, created tailor-made homogenity.

Alongside the diversity in news provision, the news’ factuality is also under fire. Facebook and Google scarcely consider themselves responsible for the accuracy of the information disseminated using their platforms. The recent American elections were, for example, heavily influenced by the large number of false news stories about both parties. How neutral is the selection of information Facebook’s news feeds provide? How much influence do other online and offline news platforms have on opinion making and political processes?

To many online news sources’ earning models, the veracity of information is no longer important. What does matter is that it is appealing and generates a lot of clicks. In a world in which declining numbers of people wish to pay for news, fact checking has become a luxury and false news proves hard to eradicate.

During the next Culturele Zondag [cultural Sunday, a nationwide event series] with the theme Uitgesproken Utrecht, and scant weeks before the national elections, Impakt will examine the effects of filter bubbles and news feeds on our global perspectives and voting behaviour.

Brenno de Winter: Dutch investigative journalist whose book Digitale Stormvloed [Digital Flood] was published in November 2016. He writes for various trade publications and news websites including NU.nl and Webwereld. De Winter is also the secretary of the GeenPeil political party.

Dan Hassler-Forest: Author, public speaker and life-long media junkie. He works as a lecturer and researcher at the Department of Media and Culture Studies at Utrecht University. His latest book Science Fiction, Fantasy, and Politics was published in September 2016.

Annabel Nanninga: Freelance columnist and journalist for media including: The Post Online, Veronica Magazine, NTR and WNL. She often appears on PowNed and almost became the smartest person in the country when she appeared on the popular knowledge quiz De Slimste Mens van Nederland.

Matthijs Pontier: The number two candidate on the Piratenpartij [Dutch pirate party] candidate list strives for innovation in democracy and education. Furthermore, he is an activist with an abiding interest in creating a free society that focuses on civil rights and democratic renewal.

The discussion will be moderated by writer and journalist Chris Keulemans.

An Impakt Festival event at the Stadschouwburg Utrecht and Zin op Zondag as part of Culturele Zondag: Uitgesproken Utrecht

NB: the event will take place at restaurant Zindering in the Stadsschouwburg, Lucasbolwerk 24, and will be provided in Dutch. 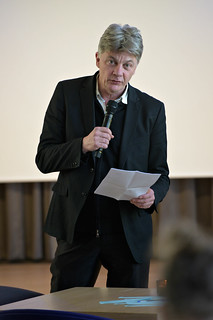