Jonas Staal re-wrote his lecture into an article for e-flux, which was published in October 2018. Read it here.

Propaganda Art in the 21st Century

Fake news, alternative facts, and the post-truth era: these terms have become familiar with the rise of Trumpism and manifold authoritarian regimes coming to power the world over. How to understand the mechanisms of contemporary propaganda today, and what is the role of art and culture in shaping the new realities that we life in? Artist Jonas Staal will introduce examples of contemporary propaganda art in ultranationalist and alt-right regimes, specifically oriented on his exhibition-project Steve Bannon: A Propaganda Retrospective (curated by Marina Otero Verzier, on view at Het Nieuwe Instituut, Rotterdam, until September 23). Additionally, he will discuss forms of transformative and emancipatory propaganda art in popular mass movements and stateless insurgencies. This lecture will further serve as an introduction on work of Adam Curtis and the screening of his film HyperNormalisation.

Jonas Staal (1981) is an artist and founder of the artistic and political organization New World Summit (2012-ongoing) and the campaign New Unions (2016-ongoing). Staal’s work includes interventions in public space, exhibitions, theater plays, publications, and lectures, focusing on the relationship between art, democracy, and propaganda. Recent solo exhibitions include Art of the Stateless State (Moderna Galerija, Ljubljana, 2015), New World Academy (BAK, basis voor actuele kunst, Utrecht and Centraal Museum, Utrecht, 2015), After Europe (State of Concept, Athens, 2016) and Museum as Parliament (with the Democratic Federation of North Syria, Van Abbemuseum, Eindhoven, 2018). His projects have been exhibited widely, among others at the Berlin Biennial (2012), the São Paulo Biennial (2014), the Oslo Architecture Triennial (2016) and the Göteborg Biennial (2017). Recent books by Staal include Nosso Lar, Brasília (Jap Sam Books, 2014), Stateless Democracy (With Dilar Dirik and Renée In der Maur, BAK, 2015), and Steve Bannon: A Propaganda Retrospective (Het Nieuwe Instituut, 2018). The artist is a regular contributor to e-flux journal and completed his PhD research Propaganda Art from the 20th to the 21st Century at the PhDArts program of the University of Leiden. Staal lives and works in Athens and Rotterdam.

After the lecture and dinner, at 19:00, is a screening of the film HyperNormalisation. Read more about it here. 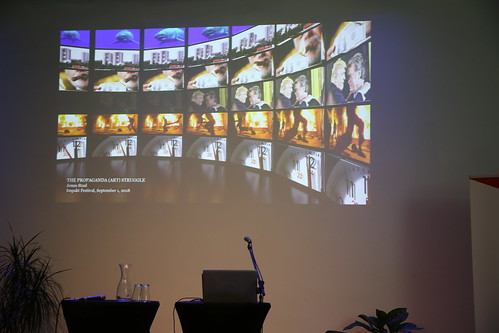