IMPAKT will again be part of this year’s Uitfeest! Check our programmes below and have a look at the weekend’s full programme here.

The world of politics looks more and more like entertainment every day. Strategically placed alternative facts, the creation of attractive myths, sensation and distraction dominate the media landscape. In a series with classic Hollywood films and critical, independent documentaries ‘t Hoogt and Impakt take a look at the Post-truth era. With excerpts from film and television that give us a rather confrontational look at how fake news influences our opinions, Dan Hassler-Forest (Utrecht University) will look ahead at four screenings of Post-truth Cinema that will take place from September until December at Cinema ‘t Hoogt.

According to many, the strong increase in social media has been to blame for the quick spread and wide reach of fake news. Bizarre news and extreme opinions score better than nuance and broader perspectives. But isn’t it too easy to blame the rise of social media? In what way do we ourselves contribute to this dynamic, and what is the influence of social media on classic media such as television and newspapers, and vice versa?

What: A short film by Keiichi Matsuda, picked by IMPAKT to open the Open Air Cinema of the Dutch Film Festival
When: Sunday 16 September, 20:30
Where: De Weerdsluis, Bemuurde Weerd, Utrecht
Language: Spanish/English, the main film will be in Dutch

Hyper-Reality presents a provocative and kaleidoscopic new vision of the future, where physical and virtual realities have merged, and the city is saturated in media. 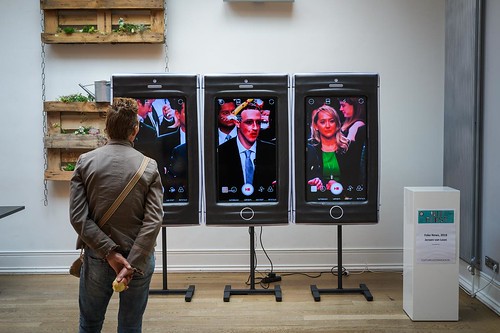