The Curse of Smooth Operations at IMPAKT

The exhibition at Steenweg is on view until 30 December
We are closed on: 24, 25 and 31 December and 1 January

The fetishization of error and malfunction seems an almost ubiquitous phenomenon in the world of media art. If artists keep finding new ways to undermine the predominant technocratic system, they often remain committed to exposing and utilising the tiny cracks in this system. The Curse of Smooth Operations investigates the potential of an artistic position that stands diametrically opposed to such fetishization. The festival exhibition at the IMPAKT [Centre for Media Culture] does not deal with the beauty of error, but with the horror of things working perfectly well. The artworks featured here do not linger on the subversive potential of tiny bugs, but focus on the oppressiveness of a totalizing system that is immunised against malfunction and able to perpetuate itself ad infinitum.

An underlying thread that runs throughout these works is the suspicion that all systems may ultimately depend on something that cannot be systematised. For a system to keep on systematising, something has to be left out or kept from view. This missing piece is no side-effect, error or bug, but rather an integral feature of the structure itself; a blind spot without which the system would not be able to sustain itself.

The video installation Emily (2010) by Danica Dakić lets us encounter this blind spot in relation to the most basic technological operations of all: the imitations and repetitions involved in the learning of human language. If the goal of language-learning is to teach the child to express herself, what is inevitably left behind in this process is precisely the self that was supposed to be expressed. For these expressions that the child takes on, do not arise out of the body of the child herself, but are imposed on her by someone else; someone who Dakić’s video persistently keeps out of view. However much you try to express yourself in language, you cannot get away from the fact that language is a system that enters from the outside, and this alien system governs the very way you think. If every time you speak, you speak under the impression that the words you utter belong to you, then your speech keeps you permanently blind to something: the fact that it is not you but rather the system doing the talking.

The film Constant (2020) by Sasha Litvintseva and Beny Wagner, locates the blind spot in a place that is the exact opposite to that of Emily. The film explores the socio-political histories of technologies of measurement. As such technologies develop, what they evermore fervently push out of sight is not the system itself, but rather the irreducible role of the human subject within this system. For a technology of measurement, such as the metric system, to present itself as perfectly objective and egalitarian – the same for everyone – any trace of human intervention must be eclipsed. The film’s recurrent use of a 360° perspective becomes an inscription of this eclipse into the very medium of the film itself: what such a ubiquitous perspective persistently keeps occluded is the unique spot of the person holding the camera.

In his new installation An Industry and Its Irreplaceable Medium (2022), commissioned especially for the IMPAKT Festival 2022, Zachary Formwalt performs a similar feat, inscribing the blind spot of the film medium into the very medium of film itself. What lies hidden at the origin of the moving image is the body of a dead animal. For analogue film is held together by gelatin, derived from the bodies of slaughtered cows. So whenever we look at film, we are effectively looking at an animal we are structurally exempt from seeing, since it constitutes the very medium in which the images themselves are suspended. By directing our attention to this blind spot, Formwalt simultaneously directs our attention to the blind spot of the meat industry, and finally capitalism at large, a system that persistently hides the industrial products and processes that remains at its base. If animal remains are found at the origin of film, they are equally there at the beginning of capitalist mass production: the very same slaughterhouses where cows were disassembled to become the bonding material of film, inspired Henry Ford to invent the automobile assembly line.

In Benedikt Terwiel’s 2020 sculptural installation Another Distinguished Member of the Humane Society (Rollo), which borrows its title from a 1831 painting by Sir Edwin Henry Landseer, it is likewise the relationship between image-making and animals that stands in focus. The figure lying on the ground in front of us is composed of the basic digital elements used in video animation to capture the movement of living bodies. Next to it, we find an animated version of the same skeleton moving across a video screen. What has driven image-making since time immemorial is the quest for truer representation: a desire to erase the border between image and life, between the symbolic systems we create to represent the world and the flux of the world itself. If video animation brings images to life by splitting them into so many elements, so many representations of limbs and joints, so many movements and life-like behaviours, then animation cannot but keep the life it seeks perpetually out of view. Reduced to a system of exterior signs, the animal is turned into a fossil, whose movements can only emphasise the lifelessness of the creature that leaps, sniffs the ground, and races across the screen in front of us.

All tours start at IMPAKT (Lange Nieuwstraat 4) and end at the second exhibition location in an empty retail shop at Steenweg 26.
Are you a member of We Are Public? With your membership you can join the tours for free! Log in on the website of We Are Public to see how to get your free ticket.

Zachary Formwalt (United States) lives and works in Amsterdam. He has presented solo projects at the Museum of Contemporary Art Busan; Academy of Fine Arts Vienna; Salon of the Museum of Contemporary Art Belgrade; Stedelijk Museum Bureau Amsterdam; VOX Centre de l'image contemporaine, Montreal; Casco—Office for Art, Design and Theory, Utrecht; Wexner Center for the Arts: The Box, Columbus, OH; and Kunsthalle Basel. His essays have appeared in various journals including Grey Room, Open, kunstlicht, and Metropolis M. He teaches theory at the Graphic Design Department of the Gerrit Rietveld Academie in Amsterdam.

Sasha Litvintseva (United Kingdom/Russia) and Beny Wagner (Germany/United States) are artists, filmmakers, researchers and writers. They are the 2022 EMAP resident artists at the IMPAKT [Centre for Media Culture]. They have been working collaboratively in moving image, installation, text and lectures since 2018. Focusing on moving image as a tool for the active production of new worlds, their practice has been driven by questions around the thresholds between the body and its surroundings, knowledge regimes and power, and modes of organizing and perceiving the natural world. Their collaborative work has been presented globally, including at the Berlinale, International Film Festival Rotterdam, CPH:DOX, Courtisane, Indie Lisboa, and Guanajuato film festivals, CAC Vilnius, Los Angeles Filmforum, Museum of the Moving Image, Transmediale, Sonic Acts, Berlin Atonal and IMPAKT, as well as at the Moscow Young Art biennale, the Wroclaw Media Art biennale and the Baltic Triennial, and on the Criterion Channel. Beny Wagner is a former researcher at Jan van Eyck Academy Maastricht (2015-16) and current PhD candidate at the Archaeologies of Media and Technology Research Group at Winchester School of Art. He was a lecturer at Gerrit Rietveld Academy, Amsterdam, from  2017 to 2021. Sasha Litvintseva is a lecturer in film at Queen Mary University of London. She holds a PhD in Media, Communications and Cultural Studies from Goldsmiths, University of London.

Benedikt Terwiel (Germany) studied at the Berlin University of the Arts. Interested in ‘landscapes’ of everyday surroundings, he asks with what cultural-historical narratives they are associated and how they can be reflected upon in his works. As an important reference point for this work, Terwiel undertook a series of walks, including from Lourdes to Santiago (2007), Bonn to Basel (2009), Florence to Rome (2010) and – with support of the Stiftung Kunstfonds – from Berlin to Rotterdam (2011). He has received scholarships from the Stiftung Kunstfonds and the Berlin Senate, and has exhibited at the Neue Gesellschaft für Bildende Kunst (nGbK), Berlin; Skulpturenpark Cologne, Kunsthalle Bielefeld; and Museum unter Tage (MuT) in Bochum.

Read more about the second location at Steenweg 26
Event | 29 November | What's in a Word? Notes on Feminist Publishing
Event | 1 December | Memories of Displacement 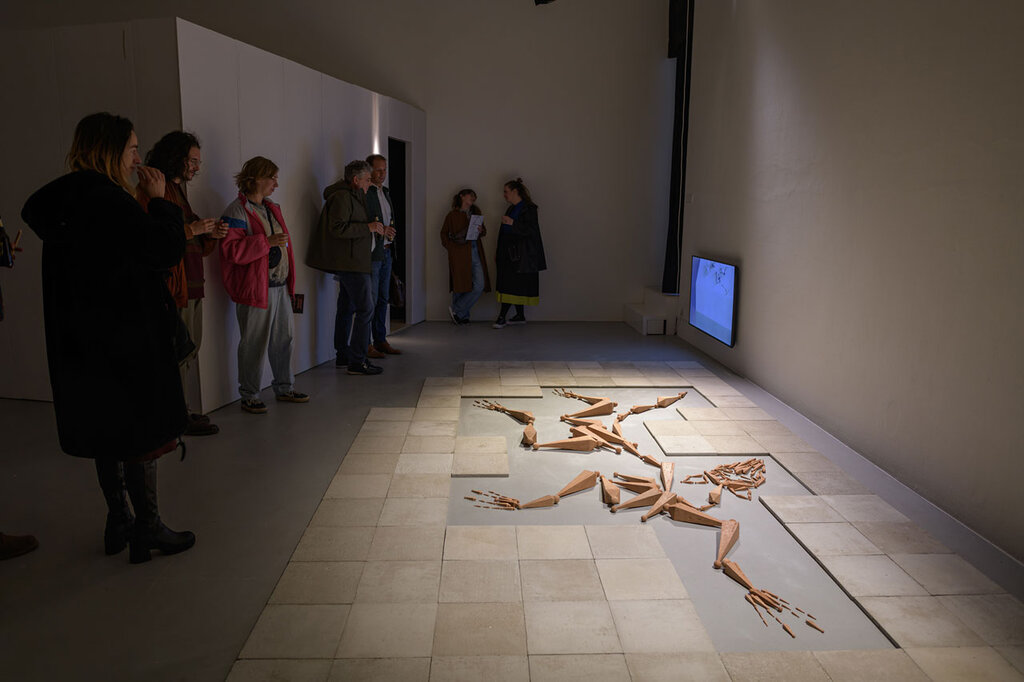 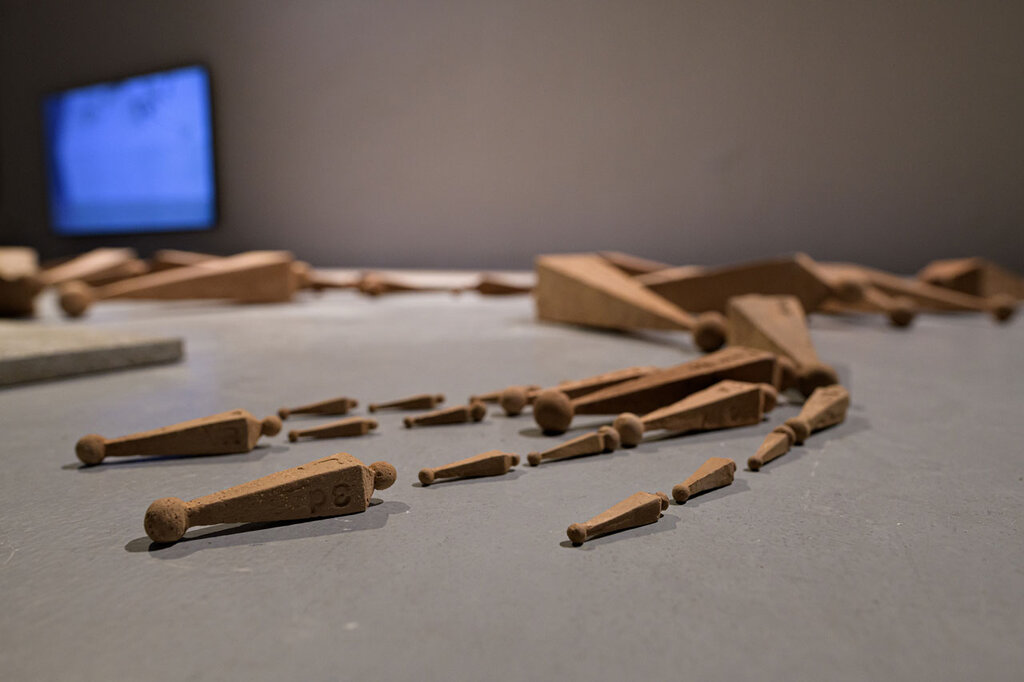 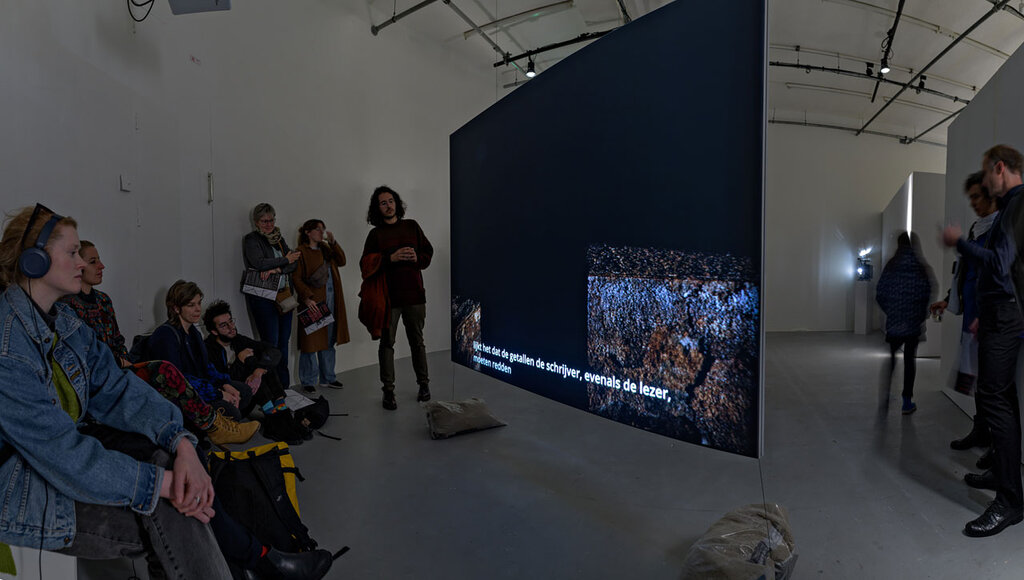 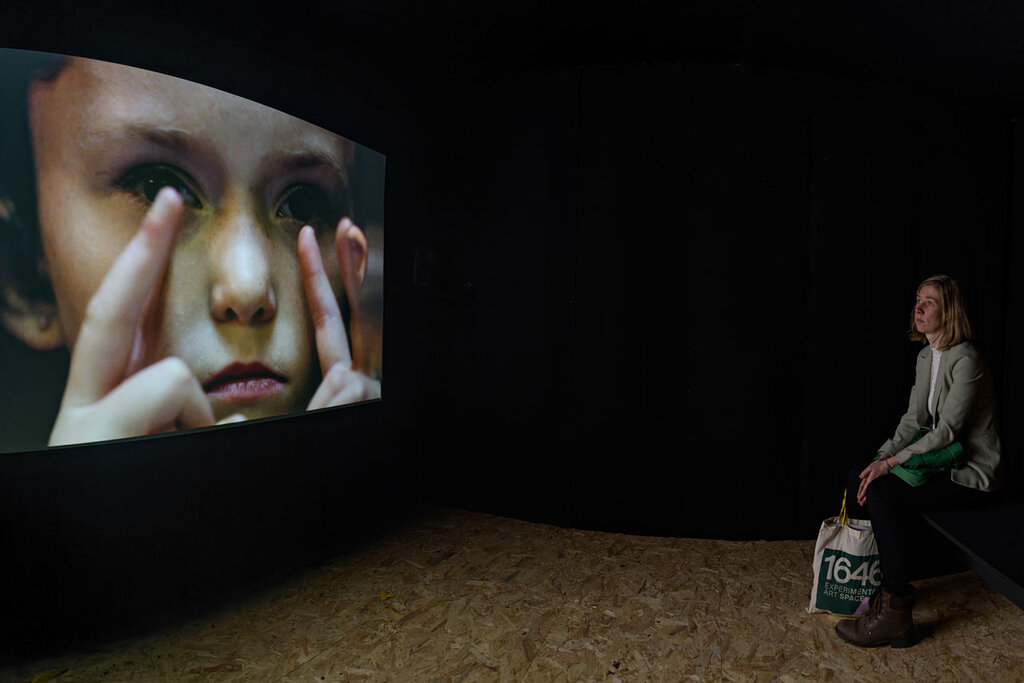 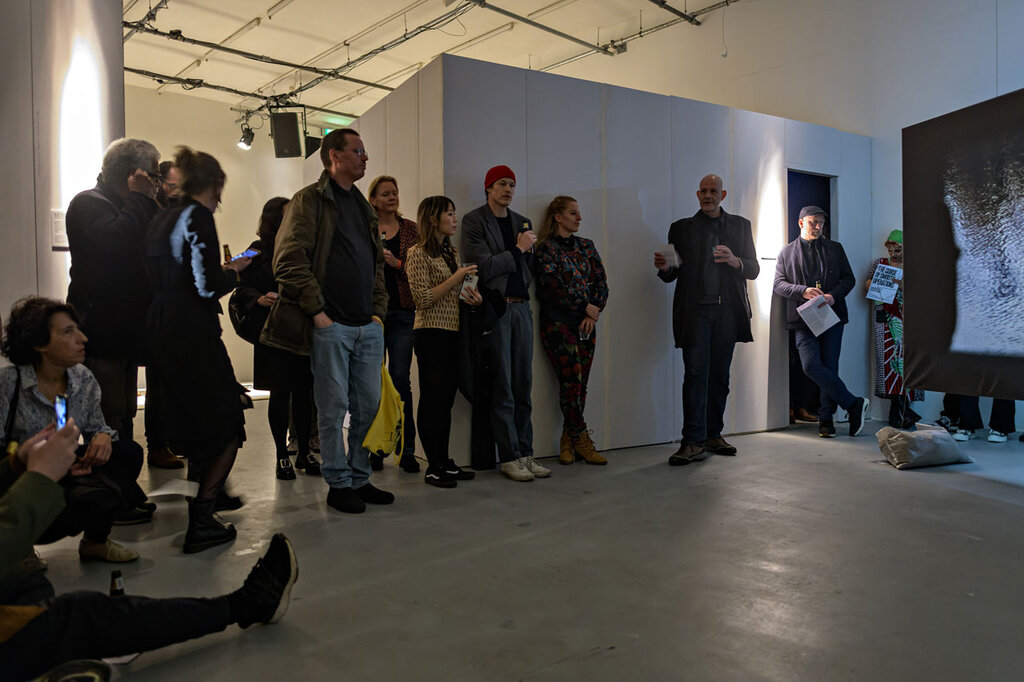 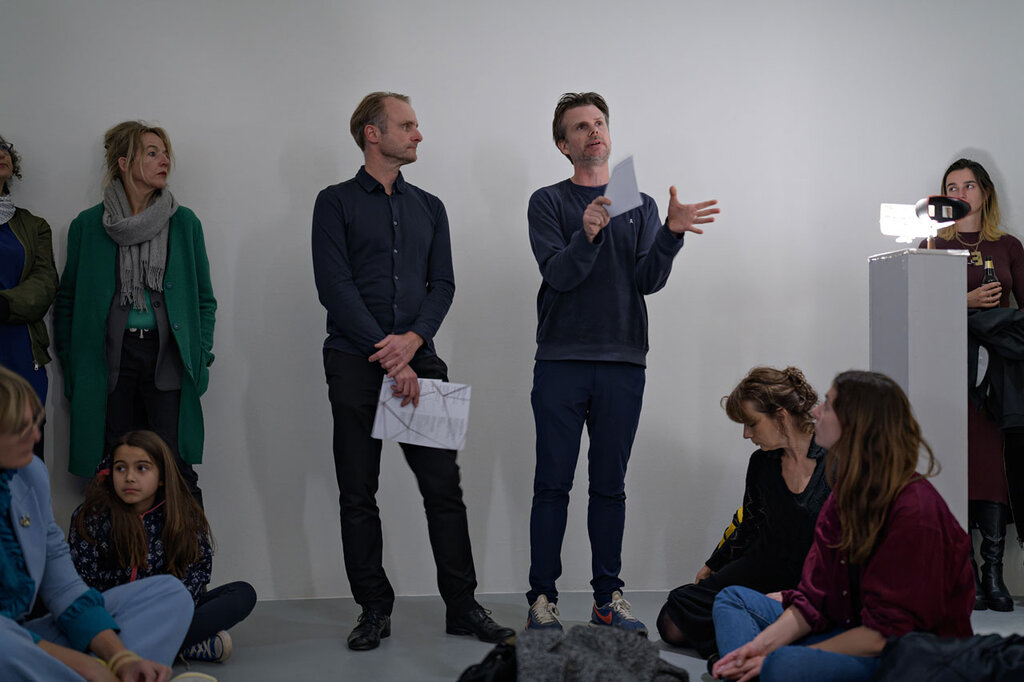 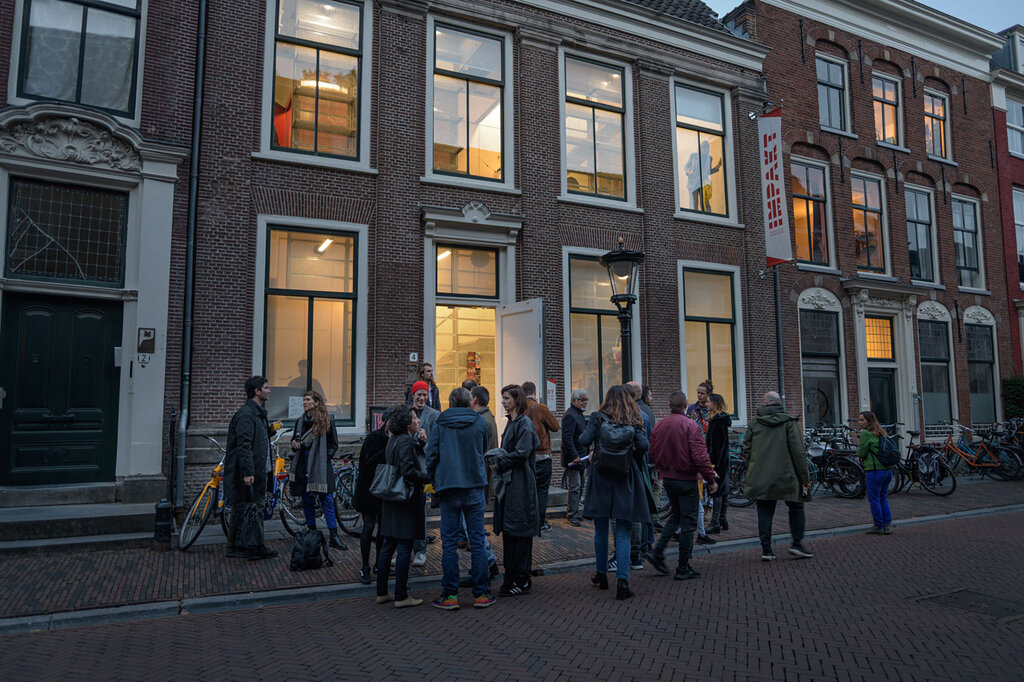