Although the title Speculative Interfaces seems to suggest something else, this year’s IMPAKT Festival is not just for nerds. Conversely, it reveals how deeply technology has become embedded, not only in our lives, but also in our bodies

IMPAKT’s 2019 theme, Speculative Interfaces, seems to target IT nerds as did the preceding years’ titles –Algorithmic Superstructures (2018), Soft Machines (2014) and Matrix City (2010). However, interface now means more than merely controlling a system processing of zeros and ones. The computer mouse augments the hand, headphones the ears and virtual reality headsets the eyes. In turn hands, ears and eyes are extensions of the brain. A broad definition of an interface, provided in the eponymous 2014 book.

by Branden Hookway, is a form of relationship whereby two entities remain autonomous whilst simultaneously also enabling the development of something new. Just before IMPAKT Festival 2019’s opening I spoke to the three curators Jan Adriaans, Bárbara Perea and Marloes de Valk to see whether they use as broad, or perhaps a slightly narrower, definition of the term and what this entails for redefining the interface in general, but also for the restructuring of this media festival in particular.

To Jan Adriaans interfaces are about narrative and interpretation: ‘I focus on how technology influences our biology; what is the human experience and consciousness?’.

For IMPAKT he compiled the programme for Thursday 31 October 2019 and, in conjunction with Perea, he will curate the exhibition that will be on show as part of the festival until 22 December. His daytime programme: Sensory Empowerment is about the use of interfaces to increase human functionality and improve humans’ self-image.

In his work as an artist Adriaans gets a great deal from the tenets of post-humanism. ‘During IMPAKT I want to link neurotechnology to how philosophy introduces new ideas about being human. You need technology to be human, the two can’t be separated. That is why, for instance, I invited Erik Aarnoutse*, a neuroscientist who installs interfaces in the brains of ALS patients which enable them to use their thoughts to control a computer. Part of my programme is about virtual embodiment. Mavi Sánchez Vives** uses virtual reality technology to ‘insert’ people into someone else’s body, e.g., domestic violence perpetrators in the bodies of their victims. This goes beyond being conscious of (or empathetic towards) the other. It turns who we are, how we function and how we behave on its head.’

Bárbara Perea explains that interfaces emerged from the computer sciences, but that the term can be applied more widely these days: ‘To me, the most important aspect of an interface is that it enables communication between various creatures’.

On Friday 1 November 2019, her programme entitled School of Non-humans will detail relations between humans and everything else.

Perea, an author on and curator of media and sound art, views IMPAKT as a platform that enables critical thought. To her, the festival is also an interface that, in turn, consists of many smaller interfaces: ‘To me composing an exhibition is like structuring a narrative. I try to invite the audience to participate in a critical thinking process. I don’t want to prescribe what people should think, I want them to discuss matters themselves’.

The third curator, Marloes de Valk, defines interfaces as boundaries between technology and humans, between every form of information exchange: ‘These boundaries are not clearly demarcated, they can be unclear or even invisible’. De Valk is curating Saturday 2 November 2019 at IMPAKT under the sub-theme Persuasive Tech Lab. Her programming examines how human behaviour can be (in)visibly influenced by interfaces. As a software artist, author and curator she deals with contemporaneity: ‘I invited people who I want to exchange ideas with and, together with the audience, we will experiment with persuasive technology. I am interested in the strategies nation states and major corporations use to influence the general public. The Cambridge Analytica affair being a good example. There is a great deal of discussion concerning how much influence the company actually exerted on, for example, the Brexit vote. Psychologist Steven Scholte*** will discuss this as part of a panel. He studies how people respond to advertising’.

How broad the definition of interface at IMPAKT is this year, can be seen at the accompanying exhibition The Sound of One Computer Thinking. In Miquel Ángel Rego’s Solilquium that consists of four pedestals bearing sculptures and a three-channel video in which a young woman, who suffers from visual agnosia (the inability to recognise objects or people) caresses Lovecraftian looking glass objects that symbolise nerve cells, the interfaces are the invisible processes between the sensory organs and neurons. Encyclopedia by Johannes Heldén & Håkan Jonson is about humanity’s interactions with a fictional animal species. On view, a robust dresser filled with and surrounded by catalogue cards for future species of animal that have been killed by humans before being conceived.

Media festivals are often not about being conscious of your humanity, but about experiencing the (non-) human, the digital. IMPAKT 2019 shows that you can also use interfaces to become more human. Marloes de Valk, Bárbara Perea and Jan Adriaans do not consider technology in art as a niche that needs detailing, but as a dam that burst quite some time ago. Computers are everywhere in society, including in art. The primary question is no longer how they differ from us, but more how we relate to and deal with everything outside our physical bodies. 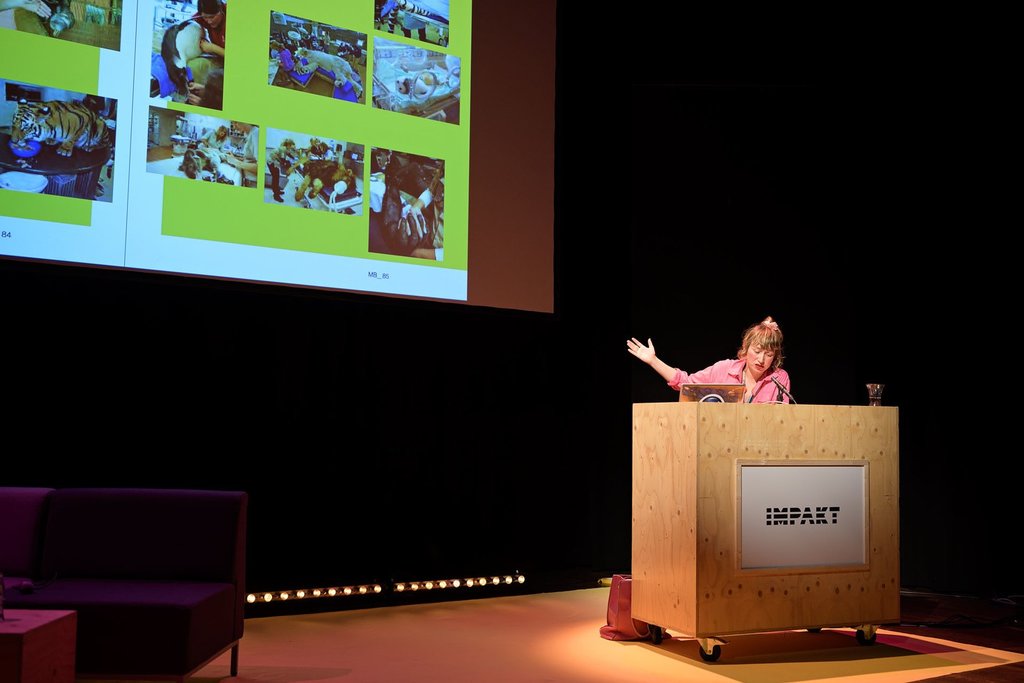