GOOGLESS is a project that draws attention to the omnipresence of google on the internet. GOOGLESS aims at pushing alternative tools that don’t rely on the google platform, while educating on Google’s problematic aspects in a playful but provocative way. Through three mediums the team will offer to the public and to politicians the chance to experience a utopian vision of the internet, one without the presence of Google.

GOOGLESS is a free and easy to install browser plugin, which lets users experience the internet without being tracked by Google. The plugin checks websites the user visits for various types of Google tracking. When there is any form of Google tracking, the plugin will block the page, explaining what tracking is on there and why that is a problem.

GOOGLESS was created Googless to bring to light the scale of Google’s monopoly in the online space. By building this plugin, we hope to be able to influence politicians to act upon Google’s monopoly. To get as many people as possible to try the plugin, we are running a social media campaign to attract users. After people try the plugin, we offer them to send an email to their local politicians about the issue to reach as many politicians as possible. By using our plugin, politicians should become more aware of the scale of the problem which hopefully entices them to regulate Google.

GOOGLESS is one of the four projects that was developed within the CODE programme: CODE brings together artists, non-artists, politicians and policy-makers in a dialogue that is aimed at the implementation of laws and legislation that will protect our rights as digital citizens and online consumers. For 5 months we worked closely together in a series of workshops, a social hackathon and a symposium about issues of privacy and freedom in our digital public sphere. At Ars Electronica 2021 we present the results of the programme.

CODE is a collaboration between IMPAKT and School of Machines, Making
And was realised with the generous support of Fonds Soziokultur, Fonds Cultuurparticipatie, Botschaft des Königreichs der Niederlande, Goethe Institute NL and Stimuleringsfonds Creative Industrie. 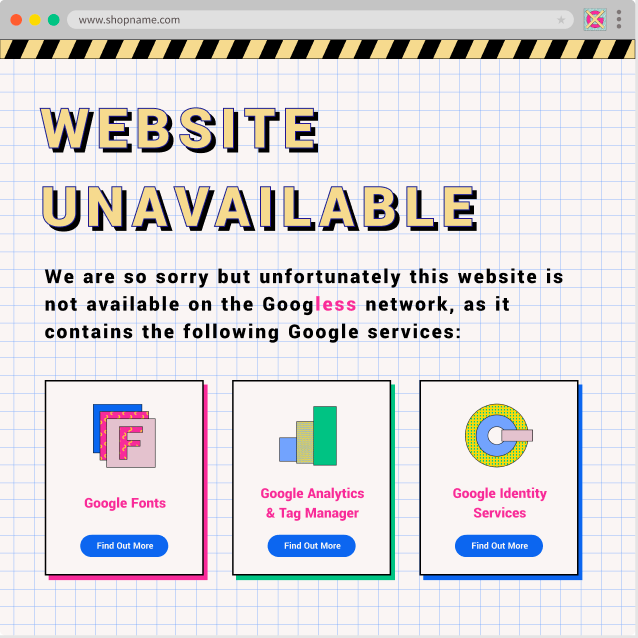